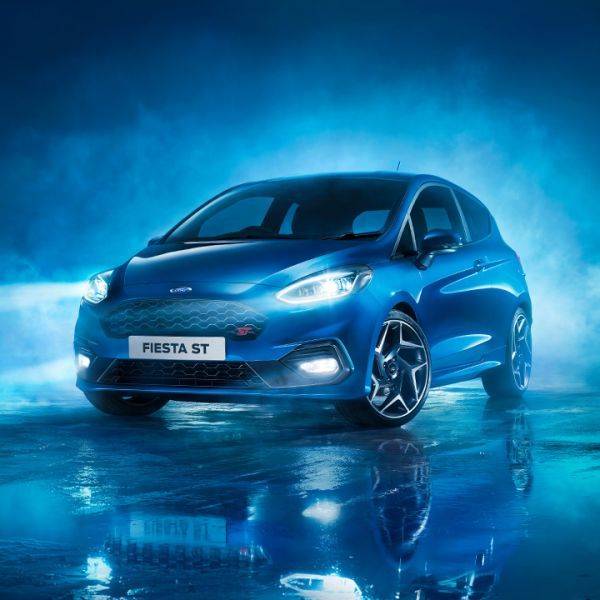 • Carbuyer awards Fiesta range its car of the year title

BRENTWOOD, Essex, 28 October 2018 – The Ford Fiesta has won three car of the year titles, two of them for the hot new Fiesta ST.
Top Gear Magazine this week awarded the Fiesta ST its car of the year honour, as well as hot hatch of the year, continuing the success of the previous Fiesta ST which won the same awards in 2013.
Parkers also named Fiesta ST its car of the year at the 2019 Parkers New Car Awards – one of three trophies awarded by the buyers’ guide to Fiesta, out of a total of four for the Blue Oval.
In its end-of-year awards issue, Top Gear Magazine seized on the completeness of Ford’s £19,495 pocket rocket, produced by the same performance team as delivered Ford’s acclaimed GT supercar.
Charlie Turner, BBC Top Gear Magazine editor in chief, said: “The Fiesta ST is the best small hatch on sale; quite possibly the best one ever built. I love that Ford spends as much time ensuring its baby Fiesta drives slickly as it does the half-million-pound GT.”
Parkers.co.uk judged Fiesta ST best car for thrill seekers and went on to crown the 200PS hatch overall car of the year. “The Ford Fiesta ST is a clear and obvious winner because of its brilliant performance, fabulous dynamics,
and killer good looks”, said Parkers editor Keith Adams. “Ford proved the most successful carmaker in the 2019 Parkers New Car Awards, with an impressive and well deserved haul.”
Ford’s third gong from Parkers was for the previous generation Fiesta – the UK’s best-selling car for eight consecutive years – as its used car of the year. And all-new Ford Focus, also on sale this year, is Parkers’
recommended small family car.
For news releases, related materials, photos and video, visit http://www.fordmedia.eu or http://www.media.ford.com.
Follow http://www.twitter.com/FordUK , http://www.youtube.com/FordUKTVorwww.facebook.co./FordUK2
The Carbuyer advice site today threw its weight of commendation behind the top-selling Fiesta, honouring both the sporty ST and the rest of the Fiesta line-up. Carbuyer editor-in-chief Steve Fowler said the Fiesta ST best hot hatch is easy to live with day-to-day, yet comes alive on the right roads, putting far more powerful alternatives in the shade.
On the entire new Fiesta range – on sale last year with the ST added in early summer 2019 – Carbuyer commended its design, technology, cabin space, value for money and fun to drive.
“The Ford Fiesta is the standout new car on the market today. Ford manages to cram so much into its supermini-sized package while retaining the trademark handling verve that really sets the Fiesta apart. Quite simply, we love it and it is Carbuyer’s car of the year once again,” said Steve Fowler.
Ford has sold more than 2,500 new Fiesta ST models since June 2019, of 120,000 new Fiestas delivered altogether in the last 18 months.
Performance Blue is the most popular Fiesta ST colour choice, accounting for more than a quarter of orders.
More than 65 per cent of customers have added the optional £850 Performance Pack, which includes a Quaife limited slip differential, launch control and performance shift lights. Almost three quarters of ST orders are for
the three-door bodystyle, and over half of customers have opted for the top ST-3 series.

Puma, has been named the Car of the Year at the prestigious What Car? Awards.